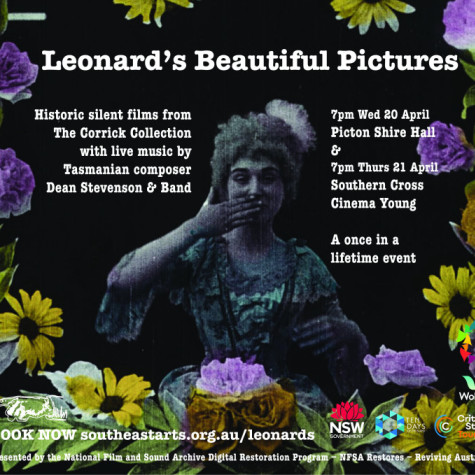 Come along to the newly renovated Wollondilly Shire Hall for a magical night of heritage cinema and live music.

The 60 minute performance is a screening of selected films from the National Film and Sound Archive’s Corrick Collection presented with a live music and foley score by three musicians.

The Marvellous Corricks were eight talented siblings: seven sisters and their brother, Leonard. He was just 14 years old when he started screening silent films.

It was 1901 and his early projections – a highlight of his family’s travelling shows filled with sketches and singalongs – would light up the world.

Leonard’s Beautiful Pictures presents these100-year-old films featuring fascinating newsreels and dramatic films that once awed our local communities with the latest in cinematography.

Now, a selection of Leonard’s films, some black-and-white, some gorgeously hand-tinted – digitally restored by the National Film and Sound Archive of Australia (NFSA) – represent a rare vision of a former world.

Paying homage to The Marvellous Corricks’ musical talents, renowned Tasmanian composer and performer Dean Stevenson and his band will accompany these moving pictures with a playful new musical soundscape.

So, bring your family as we welcome Leonard’s Beautiful Pictures into the 21st century.

Originally produced by Ten Days on the Island.